Welcome to the official The Banjo Lounge 4 website! The Banjo Lounge 4 are an acoustic mash-up band delivering classics in an original and imaginative packaging. Dressed in their infamous classic tweed suits, Old School Hip Hop, Funk, Swing, Electronica, Dance, Rock all get the genre-mashing treatment. Check out the repertoire menu for our current hit-list.

They are a 4-piece comprising of banjo, acoustic guitar, double bass and drums with 3 part harmonies.

Once described as ‘Hayseed Dixie on speed with a serious chunk of Funk!’ they have been gathering a following fans wherever they play. Since their inception in 2007, they have played many gigs up and down the country and beyond including festivals, awards ceremonies, the 2014 Ryder Cup end party, Edinburgh Film Festival wrap parties, Edinburgh Book Festival launch parties, gigs for Visit Scotland, Fynefest, List Magazine’s annual Festival Party, Club Vegas and The World Famous Speigeltent along with over 500 other shows. Other notables are gigs at the old Marquee Club in Soho, London, a cocktail boat on Loch Lomond, an awards ceremony in Malta and a pool party in Ibiza. As well as many corporate and public shows they have also played many private parties too including one for the cast of BBC’s Eastenders and another for top London fashion designers.

Their debut album ‘Get UR Tweed On’ is now available on iTunes, Bandcamp, Spotify and from all the usual outlets. Also check their Soundcloud page for other recordings like demos etc. 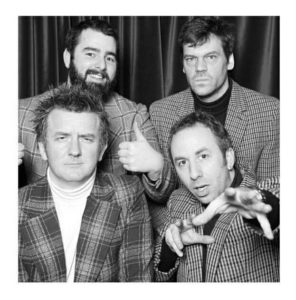 Born in Belfast and as well as playing the 5 string banjo in The Banjo Lounge 4 he plays in and manages independent folk/bluegrass band Southern Tenant Folk Union and London based soundtrack maestros The Incredibly Strange Film Band. An experienced touring and recording musician, Pat has won many awards, performed on national radio (Radio 4’s ‘Loose Ends’, BBC Radio 2),TV (Saturday Night Live, Andrew Marr Show, The Late Late Show) and in theatres and venues all over Europe and USA.

Has been signed, recorded albums, made music videos and played and toured in America, Holland and the U.K. Won MTV ‘In The City’ Unsigned Band of the Year award in 1998 (‘Idlewild’ came second) and subsequently signed a two single deal with Boy George’s ‘Indie’ label, before securing a large album deal with New York-based label ‘Roadrunner Records’. The resulting album was released in the US, Australia and Japan in 2000 and involved playing promo gigs around San Francisco and working with producers such as Jim Abbiss (Bjork, DJ Shadow, Money Mark, Arctic Monkeys) and Adrian Bushby (U2, Placebo, Kylie, Gomez, Maximo Park, Foo Fighters). He was also NY producer Arthur Baker’s resident DJ for 2 years and head of Publicity & Promotions at the Jazz Café and the Forum in London for four years and worked on shows for James Brown, Kelis, Chaka Khan, Isaac Hayes and De La Soul amongst others. He also has an honours degree in Sonic Art and collaborates with dance and theatre companies.

Born and raised in Belfast on a strict diet of Prince and Jimi Hendrix, his fusion of pin-drop delicacy and acoustic groove draws comparisons as diverse as Nick Drake and Jason Mraz. As a multi-instrumentalist and session player, he’s performed and recorded with many artists. Some shameless name-drops include: KT Tunstall, Horse, Adam Holmes, Alex Cornish and The Jellyman’s Daughter. He has just finished recording his debut album with legendary producer John Wood.

Graduated from Edinburgh Napier University with a 1st class honours degree in music, and now plays regularly across the UK and further afield. Recent artists he has worked with include boy band The Wanted, girl band The Sugababes, Grammy nominee Muhsinah, African Jazz Singer ‘Somi’ (an acclaimed world music artist that works with John Legend, Paul Simon, Dave Gilmore), no.1 selling artists The Noisettes, Scottish rising star Carrie Mac, electronic act Homework and critically acclaimed Jazz/Fusion group Trio HLK. He has performed on BBC1, 2, ITV and Channel 4 and as well as radio stations across Europe and played in the multiple award-winning show ‘Hamlet! The Musical’.

‘Blown away and entertained in equal measure!’

‘Never have I seen a relatively lesser-known band so imaginatively mashing up well known tunes with the energy, stage presence and entertainment value expected of a big venue mainstream band, combined with the musicianship and sheer originality that they bring in the production of their versions’